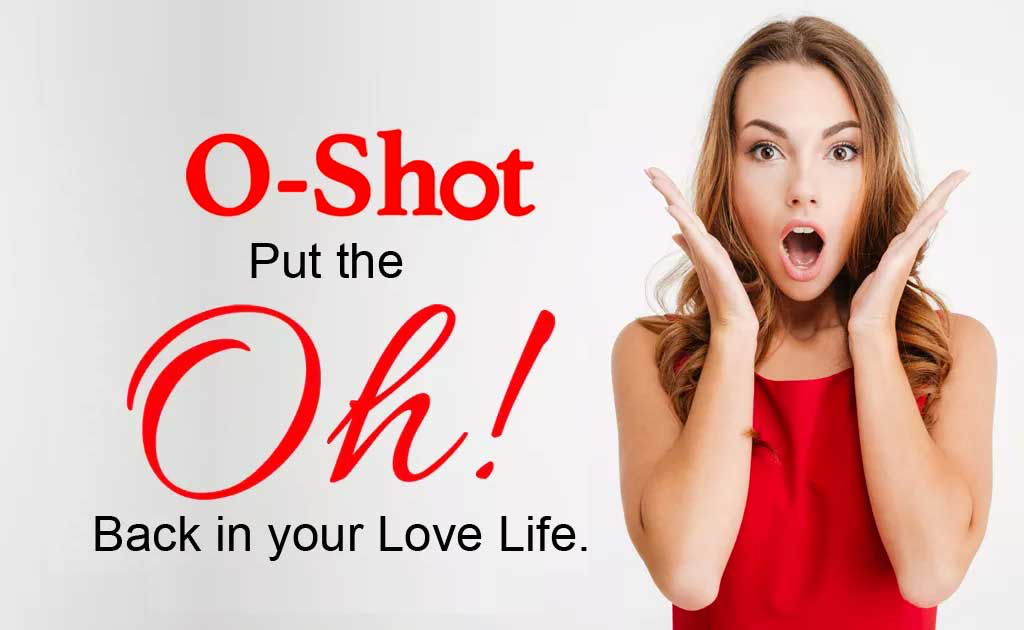 The O-SHOT is injecting PRP into the “Orgasm System” of women to improve function. “The Orgasm System is an elegant integration of multiple anatomical structures, psychological conditions, and hormonal ingredients that work together to create the woman’s orgasm- with the resultant pleasure, loving connections, and psychological and creative benefits.” (Dr. Runels) It is important to understand all the components of the system and how everything works together, addressing each area to get the best results.

“THE O-SHOT: THE ANSWER TO FEMALE IMPOTENCE”

Modeled after the same technology used in the Vampire Facelift® Procedure…

The numbers of women who suffer with sexual problems–30-50% (depending upon the age) are discouraging (the higher incidence is seen in younger women). And remember, these numbers only include women who psychologically distressed. If a woman avoids sex because one of these problems but claims to not be bothered by the lack of sexual activity, then she’s not counted in these statistics. Is that really the best way to tabulate the incidence of a problem? Perhaps. But, suppose we didn’t count high cholesterol as a problem unless it bothered the patient with a heart attack? Is it possible that a women just learns to tolerate less than optimal sexual activity (rather than Activating the Female Orgasm System) and so eventually does not consider the sexual condition to be a problem?

Since the number 30-50% listed in the medical literature considers only those bothered by the symptoms, the actual number of women with the 4 conditions described above would be greater than 50%–some estimate to be at least 60%. Perhaps even more disturbing, think of the ripple effect throughout society as children and communities suffer with the breakdown of marriage relationships because of these problems. With 150 million women in the US in 2010, at least 50 million women suffer with these problems. What ripple effect does that have on families in the USA? So, why do so many women suffer in silence?

Why Women Suffer Even After Seeing the Gynecologist

Research shows that only about 14% of women EVER talk to ANY of their physicians about sex. With around 4 in 10 suffering from a sexual disorder, why do only about 1 in 10 ever talk to their physician about sex? According to Practice Bulletin in Obstetrics and Gynecology (April 2011), the reason may be that (with the exception of short-term hormone replacement) research shows few proven treatment options. Both physician and patient would be discouraged by discussing a problem for which there is no proven solution–so the doctor just doesn’t ask. Notice that the only treatment offered is vaginal estrogen or topical testosterone or psychotherapy. And even with the hormone therapies, the results were described as short-term. No wonder only 14% of women ever discuss sexual problems with their physician–if the woman is already on hormones (or pre-menopausal), the only known solution, per the official recommendation of the American College of Obstetrics and Gynecology, appears to be psycho-social therapies!

There’s no doubt that sex-education/counseling helps sex, but if the woman’s body does not respond as it should–even with proper knowledge–then the woman continues to suffer… That explains why 50 million women in the US alone continue to suffer mentally and physically from sexual problems. So…

“ISN’T IT ABOUT TIME THE WOMEN HAVE THEIR TURN?”

Seems men have plenty of options for medical therapy, while women get psychological counseling and maybe some hormones. It’s about time for that to change. So, what’s new…? For several years, blood-derived growth factors have been used to regenerate the face.

Warning: There is no magic shot that takes the place of all the other factors necessary for amazing sex (emotional, hormonal, relationship, general health). We highly recommend working with a sex educator to find the best ways to ACTIVATE THE FEMALE ORGASM SYSTEM. (If you are a sex educator, keep reading and you will see how you can participate in this important project).

WHAT DOES THE DOCTOR DO?

First the nurse applies a numbing cream to the vagina. Then blood is drawn from the arm in the same as with any blood test. Then, using a centrifuge and a special method, platelet rich plasma is isolated the resultant growth factors. The whole process takes about 10 minutes and can be done there in the room with the patient. Then, using a very thin needle, the growth factors are injected the clitoris and into the upper vagina into an area most important for the sexual response, the O-Spot. Because these areas have been numbed with the anesthetic cream, the woman feels little or no pain.

There has never been even one serious reaction to PRP prepared by an FDA approved kit in any part of the body (the FDA has not evaluated the use of this kit for preparing PRP for use in the vagina…but this procedure only uses the woman’s own blood to prepare the injection).

Higher concentrations of calcium chloride can usually be found in the tissue than in the blood, so when the doctor adds calcium chloride to the PRP, then the platelets think that tissue injury released the calcium into the blood stream. PRP has been used effectively for a variety of treatments for more than 20 years. Over 500,000 procedures involving the injection of PRP into various parts of the body have been performed with no significant side effects or complications reported (unlike the granuloma formation that happens with other accepted procedures).

HOW DOES THE NEW TISSUE GROW?

This extra calcium chloride triggers the platelets to release at least 7 different growth factors that then trigger one type of stem cell to grow younger tissue–activating stem cells. The nurse injects the PRP into an area called the O-Spot–a collection of structures that activate the orgasm system. The woman usually enjoys the effects of the O-Shot™ almost immediately as the growth factors begin to rejuvenate and enhance the sexual response. So, the O-Shot® (or Orgasm Shot®) is a nonsurgical procedure that uses the growth factors each woman has in her own body to stimulate vaginal and clitoral rejuvenation to activate the Female Orgasm System. Thus far, almost all women receiving O-Shot™ procedure enjoy an increase in their sexual response, and for many the increase is dramatic. These sometimes experience other effects listed here:

Although each woman’s experience can be different, here’s a list of some of the things our patients have told us they experience after having the O-Shot ® and rejuvenating the Orgasm System:

Only professionals who have been trained and certified to perform the O-Shot® can perform the procedure or be involved in the clinical study. Only professionals listed on this website have been trained and licensed to do this procedure. This procedure is protected by US Patent & Trademark Law (serial number 85270524)
*** Advanced procedure done for an additional fee. This includes Amiogen or Umbilical Stem Cells with the PRP ***

Biocore Health is an affordable and effective way to ensure you and your loved ones are getting the daily recommended intake of essential vitamins, minerals and other important nutrients necessary for optimal health. We provide wide range of healthcare products like nutraceuticals, CBD, medications and supplements and services stem cell treatments, hormone replacement therapy, weight loss, NAD+, Sexual health procedures.